To attend the design conference An Event Apart has been on my bucket list for several years. After having read articles on the blog A List Apart and books in the A Book Apart series, it was finally time to visit the conference in Boston this spring.

Every year since An Event Apart was founded in 2006, the conference series has been held in different cities throughout the United States. When writing this, the conference has already been held in Seattle and as well as Boston and will also be held in Washington D.C., Chicago, Denver, and San Francisco.

After having spent an awesome two-week vacation in the Pacific Northwest, I flew in from Portland and landed in Boston two days before the conference started.

After having picked up my conference badge and spent the rest of the Sunday exploring the city’s historic Freedom Trail, I gathered with hundreds of designers and developers at the Boston Renaissance Waterfront for three days filled with talks on topics related to user experience design, service design and frontend development. 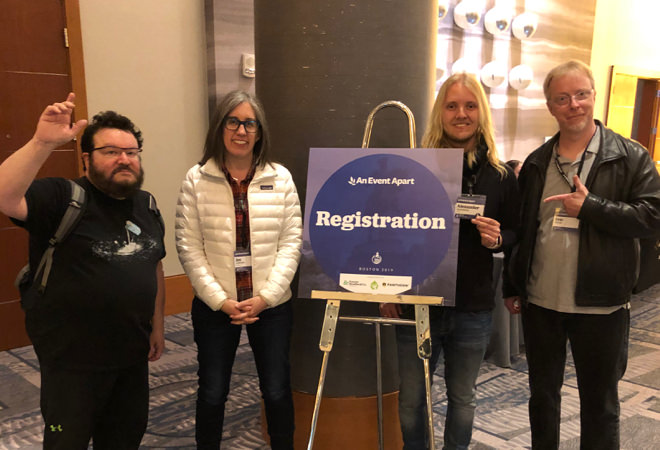 I ran into Jeffrey Zeldman, Jen Simmons and Eric Meyer when picking up my conference badge.

Here are my favorite takeaways from a conference so rich on skilled speakers, great talks, responsive (yes, responsive!) merchandise and lovely “apartniks” (as we attendees are called).

Slow is great for comprehension

An Event Apart founder Jeffrey Zeldman started up the three day conference stating that while fast is best for customer service design, slow is best for comprehension.

He explained that there’s too much clutter and too many distractions on websites today that stress readers out. He continued saying that designers should help readers slow down, so they can make informed decisions. 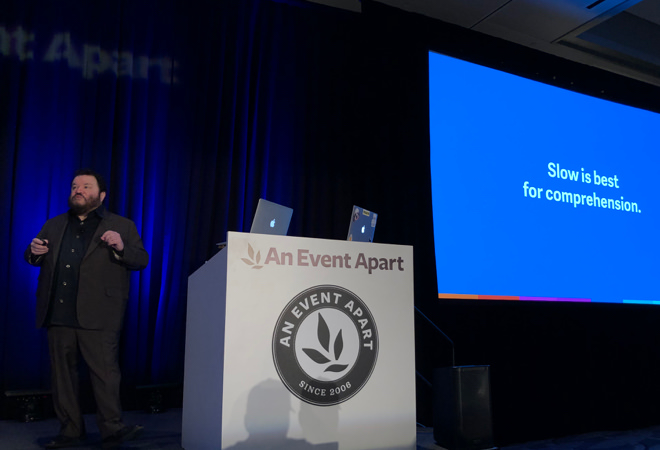 First speaker on stage, Jeffrey Zeldman on why we should design to slow down users.

His advice for increasing comprehension for users, is to use:

How to design and implement design systems

In recent years, “design system” has become a popular buzzword in the design community. A lot can be said about both the design aspect and implementation aspect on this topic, which was what Dan Mall and Brad Frost went into depth about during their consecutive talks that wrapped up the second day in Boston. 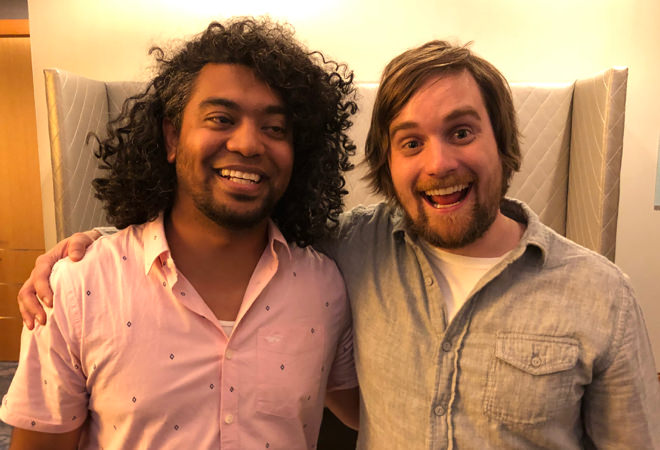 Design system experts Dan Mall and Brad Frost were all smiles after finishing their talks on the second conference day.

With their slides on my hard drive (and cloud based file sharing service), I can’t wait to go over them with the development team at my client back in Stockholm. We’re luckily on the right path, but we can get even better.

Mina Markham of Slack and creator of Pantsuit (the design system for Hillary Clinton’s presidential campaign in 2016) impressed the audience during the first day of the conference when talking about art direction and especially localization.

Using examples from her work at Slack, Mina Markham explained that localization is not just about translating text. It also means adjusting visual design, illustrations and photos to a country’s people and culture.

Markham also pushed for progressive enhancement for making sure users have a great experience on their own terms, instead of a single experience being forced on them by designers and developers.

Designing typography is a delicate matter, but using Variable Fonts can make the process easier while also greatly improving the performance of your website. This is what Jason Pamental brought up while on stage in Boston.

Using Variable Fonts lets you have a single font file for an entire font family, instead of one file for each font. This technique offers you more CSS styling options while also reducing both the amount of HTTP requests and the total file size for your typography choices.

Getting curios about Variable Fonts? Have a look at v-fonts.com to see what it’s about and read through Jason’s slides that he generously put online.

Focus on inclusive design and accessibility

Since I have worked with and given talks about accessibility for several years, I was overjoyed with the focus on this topic throughout the conference!

Val Head, who just before coming to Boston gave a talk at our conference From Business To Buttons in Stockholm, talked about making motion inclusive. 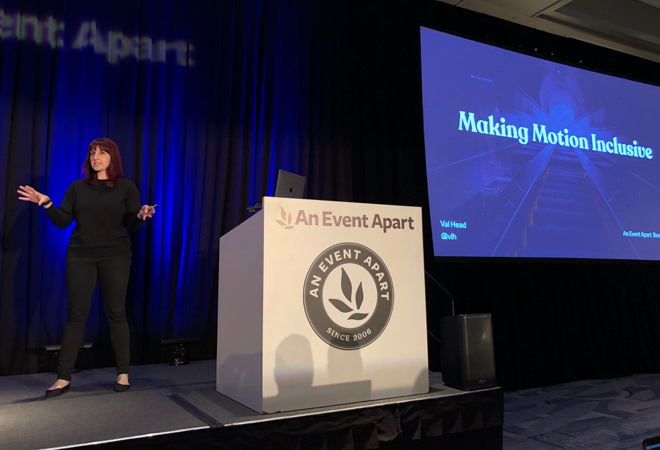 Val Head about to bring up some hard truths about cool, but not inclusive, animations on websites.

Here in Boston, Val brought up the new motion-related guidelines in the recently updated WCAG 2.1 and showed us examples of which types of motion can be triggering for people with disabilities. Detailed information can be found in Val’s slides that she has posted online.

She suggested we should handle these issues by:

Marcy Sutton later took to the stage and added to this topic by discussing the accessibility risks when using new CSS techniques. For example, thinking of HTML markup order versus visual order of elements when using layout techniques such as Flexbox and CSS Grid Layout.

Michael Austin Sui kicked off the third day, talking about AirBnB’s approach to inclusive design and sharing lots of tips and tools that were much appreciated by the “appartniks”. 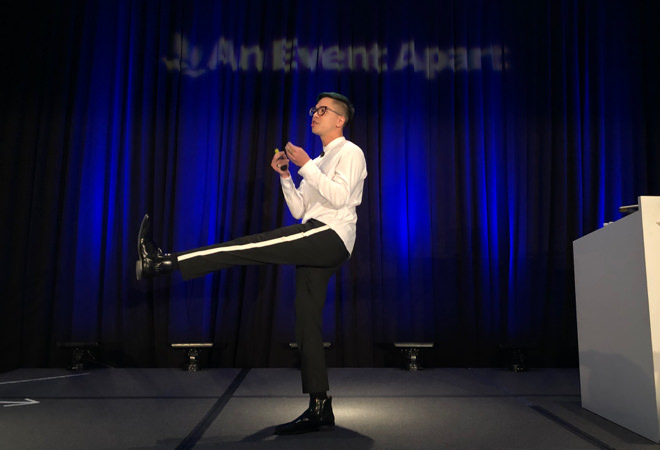 Michael Austin on stage mid-kick during the last day in Boston.

After Michael Austin Sui’s talk, I couldn’t stop thinking about his statement that while you can exclude your design from certain platforms and countries, you can’t exclude it from being used by people with disabilities.

Derek Featherstone of Level Access took this topic one step further when he made us question if our design process is even inclusive to begin with.

Featherstone gave us specific advice on how to analyze if our tools and methods for collaboration can be used well enough by people with different types of disabilities. If we can’t include people with disabilities in our design process, we’re not really practicing inclusive design and the end result will suffer.

As a great example of inclusive design Derek brought up the Xbox Adaptive Controller, which was made for and together with people with limited mobility.

Wrapping up the of the first day of An Event Apart, conference founder and speaker Eric Meyer along with seasoned layout experts Rachel Andrew and Jen Simmons rocked our cascading style sheets during three consecutive talks.

Meyer talked about the many possibilities of using CSS generated content (the psuedo-elements ::before and ::after) for styling minor and major details and building simple development tools while avoiding cluttering up your HTML markup with unnecessary elements.

Rachel Andrew proceeded blowing everyone’s mind when she went into great depth about the possibilities CSS Grid Layout and its future that is CSS Subgrid. Have a look at Andrew’s slides, which she tweeted out at the end of her talk.

Jen Simmons then took the stage solving layout challenges using both older CSS layout techniques as well as newer ones such as Flexbox, but mainly CSS Grid Layout in impressive demos. 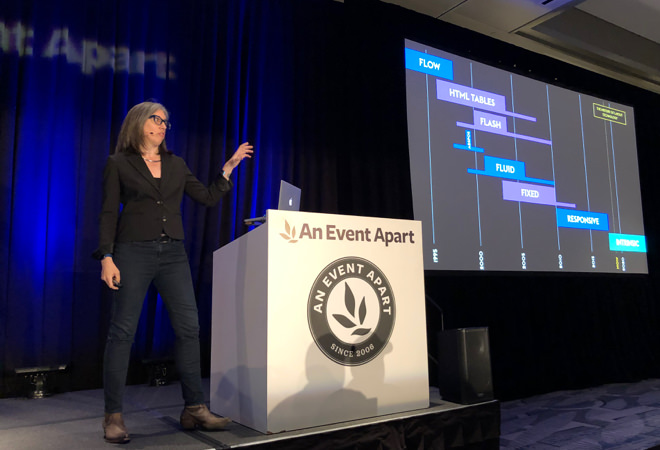 Jen Simmons on stage going through the history of CSS layout techniques.

Even though Simmons rightfully advocated for the awesomeness that is CSS Grid Layout she stated that “Good old fashioned stuff is still good” and strongly hinted that you don’t have to do everything in just Flexbox or just CSS Grid Layout. You should use what layout technique best fits the job and combine them when suitable. Have a look at Simmon’s presentation she published online after her talk.

Not part of the CSS Rock block, but during the second day in Boston first-time  An Event Apart speaker Sara Soueidan gave a high level talk about SVG Filters. Her talk was over my skill level, but it will be a great source of information in the not too distant future.

Talking about designing meaningful experiences, Kate O’Neill took the stage during the second day and stated that we cannot leave meaning to be decided by machines and let absurdity scale in the more and more tech- and data-driven future.

O’Neill brought up the staffless Amazon Go stores as an example. With the Amazon Go app installed on your smartphone (along with your credit card details) you just enter the stores, do your shopping and leave (without using a self checkout station).

While this is cool in many ways, O’Neill mentioned that you cannot aid another shopper by taking a product off the shelves and handing it to them. It won’t be registered correctly. Is this a meaningful experience?

While on stage a few hours after O’Neill, Sarah Parmenter talked about how we can successfully design for all differences in people. Not just differences in gender and cultural background, but also differences in our personalities. 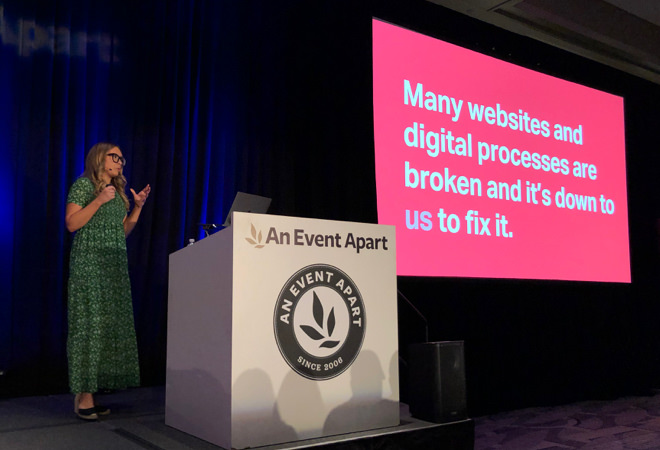 Sarah Parmenter on stage stating what we designers need to fix broken websites and digital processes.

Sharing many great examples, one stood out more than the others. Parmenter brought up British flower delivery company Bloom & Wild who after feedback from her, made it easier for their customers to opt-out of the company’s annual Mother’s Day email campaigns.

Since Mother’s Day is far from a happy holiday for a lot of people who have suffered loss and tragedy, this minor design change sparked incredible love and praise in social media and even made headlines in the British newspapers. Some empathy goes a long way in successful service design.

During the final day of the conference, Jason Grigsby took the stage wearing a tailcoat and bowtie and started performing magic tricks! 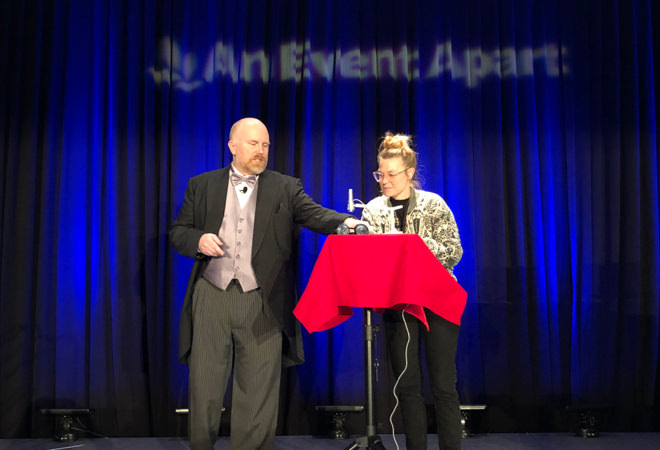 Jason Grigsby on stage with an audience volunteer during one of his web form magic tricks.

He didn’t pull rabbits out of hats or saw people in half. He did something even more impressive by signing into websites without using a password and entered credit card information without using a keyboard. Whoa, eat your heart out David Copperfield!

It wasn’t really magic though. Grigsby showed the power of combining technologies like:

Gerry McGovern had the difficult task of wrapping up the last day of the conference. Impressively, he nailed it and got both the most and loudest laughs in the room. Somebody needs to get this guy a Netflix special.

With great energy he talked about the advantage of focusing obsessively on your users and adjusting your design to their feedback as fast as possible. He explained that you shouldn’t design for your users, you should design together with your users.

”Simplicity is a survival strategy'', he stated while presenting examples of gradually improved design by Google, AirBnB and the British Government to an enthusiastic audience.

An Event Apart in Boston 2019 was nothing short of fantastic and I’m so glad I was able to attend. Just as expected, I had a lot of fun, met lovely “apartniks”, listened to very interesting case studies and learned about many useful tools, techniques and methods.

Did you also attend An Event Apart in Boston this year? Do you feel there’s something I forgot to include or misunderstood? If so, please let me know in the comment section.

The videos from From Business to Buttons are being published here!