We confess, we have made jokes about AI. Our post about AI being the jury for inUse Award was an April’s fool prank. But, this article isn't a joke. The From Business to Buttons speaker Chris Noessel and his partner were married by an AI.

We, a bit late but still, apologize for our April's fool prank about the jury for the inUse Award being an AI. It won't. Not this year, anyway... Nevertheless, here's an even better April story…

It was April a year ago when Chris Noessel and his husband were married in California with close guests and wonderful surroundings. The extraordinary thing – for those of us not personally involved – was that they were married by an AI. Chris Noessel wrote all about it in a post at Medium. 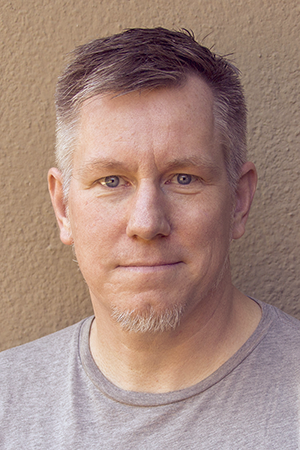 The service was extraordinary in some ways, intimate and nice in others.

“There was no Terminator wearing vestments, leading us through vows with its Schwarzenegger voice, skull-crunching feet, and sinister glowing red eyes. It was quite lovely, if we do say so ourselves”, Chris writes.

"A synthetic voice was heard"

The guests took assigned seats around the innermost ring of chairs, and the soon to be newlyweds walked up and stood facing each other beneath the pergola.

Then a synthetic voice was heard, synchronized with a light ring hanging over the lucky couple’s heads which pulsated with the voice’s volume.

“Ben and Chris, you have written these intentions, but because you’re probably nervous, I’ll ask you to repeat them after me.”, it said.

Later the AI asked for the rings and said:

“By the power vested in me by my 12 volt, 5 amp DC power supply, and my 2.5 gigahertz processor, I pronounce you…married.”

There are some problems with the arrangement. An AI is not authorizable, it should be “a person”, over 18 and so forth. Chris writes in his Medium post about these issues, considering them not quite philosophically stringent. Can an AI be a person, could it be 18 years old… Which things are relevant in these matters? Lots of questions to be asked, questions that also could be applied on AI in general, of course. If you’re interested, and you are, Chris discusses more of how to design a sacred event with AI.

So whether or not it was by the book, it was interesting. And, should we say, modern. They may have been the first couple in the world to be married by an AI.

Videos from From Business to Buttons 2019 is being published right now!