I have hit on a formula for getting creative things done. It consists of two simple ideas and has done wonders for getting things out of my notebooks and into the world. Most recently I used the formula to write a short book on creativity in about a week. What will you do with it?

In talking with people it seems as if one of the main barriers to getting creative things done is self-censoring: the fear that what we are doing is not good enough or original enough, and concerns about what other people may think of us.

Our creative urge is also often quenched by ambitions set too high. Mix all of that doubt together with social anxiety, high ambitions, and the limited time that most of us have available, and most projects never get off the ground.

The two-part formula that I have hit upon circumvents these mental barriers, as well as our limited time for side projects. It goes like this.

Figure out the smallest version of your idea. What is the smallest, quickest, simplest embodiment of your idea that you can come up with? And don’t worry if this is a version that people will care for, or pay for.

Let me give you an example. I have accumulated a long list of ideas for books that I might write. Not long ago that list included over 30 different titles. Clearly, I am never going to write those books, but is seems a shame for them to exist only as ideas hidden away in a list. I reviewed my list and put aside about five titles that I might conceivably want to write one day. I then took the remaining titles and started making fake ads for them. Ads that were the smallest version of my book ideas that I could come up with. These ads are a bit like one-panel cartoons, where each one captures some provocative and often humorous thought. Making funny ads for non-existent books is a significantly smaller task than actually writing, editing, and publishing those books. I created a channel for them on Instagram and shared them with my friends.

Now for the second part of the formula:

Make the smallest version of your idea that is easy for you to create with the particular resources and skills that you have available.

What does this mean? It means that if your idea requires you to draw, and you are not very good at drawing, then find a form for your idea that matches your ability, or which replaces the need for drawings with something else (e.g. collages or photos). If you still need drawings, then consider ways of generating them that match your ability. Or, perhaps ask a bunch of children to make the drawings for you, or program an AI, make use of public domain art, or substitute written descriptions of the drawings for actual drawings.

Don’t be afraid to ask for help, or exchange favours. The people you know are part of the resources that you have at your disposal.

For my Instagram channel, I made simple book covers in a vector graphic program. This is something that I have done before and knew how to do. Instead of taking nice pictures of people reading and holding books, I simply purchased some stock photographs. At first I used a different image for each ad, but then simplified this further and reused the same photograph, only varying the colour of the book cover.

Here is the first one that I made: 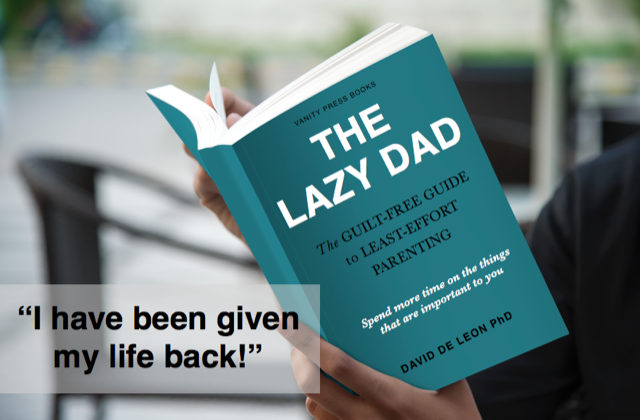 The advantage of this approach is that it is doable with the time and skills that you have. You don’t have to make the most developed and ambitious version of your idea. Having something out there in the world, I would argue, is worth so much more than having something stuck in your head or in a notebook. It is also incredibly rewarding and motivating. The minimal versions of your ideas become prototypes which you can test on an audience, and revisit and develop later should you feel like it. 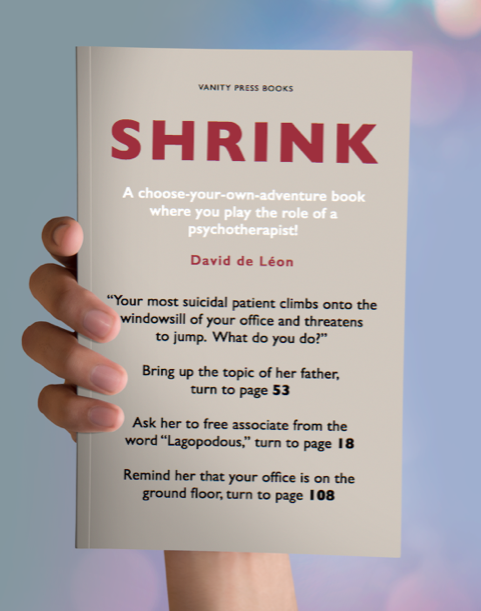 It might be obvious by now that I like books. I also have a YouTube channel where I talk about books. I used the same approach for the channel as outlined here. Rather than faithfully reviewing books, which would require careful and nuanced reading, I decided to simply talk about whatever struck me as noteworthy in a book or, if I had an interesting angle, to talk about that. Sometimes I even talk about books that I haven’t finished reading.

I started with a simple process for making the videos, and have since worked to make it even simpler. The simpler I make the process — and the more stripped-down I make the idea for a video — the more likely it is that I actually make a video.

A lot of creative formats

Sometimes the easiest thing might simply be to blog your idea or post it on social media. There are also a lot of creative formats, as well as games, that have a kind of simplicity and low demand built-in. Why not try your hand at blackout poetry (blocking out text on a printed page and leaving words that form a poem or aphorism), microfiction (stories with 300 words or less), or any of the art and party games that the surrealists used to indulge in (just google “surrealist games”)?

Also, don’t worry that someone will steal your idea. There is more to be gained by launching your idea into the world. Things will start happening, people will notice you, and by making things you will refine your style and purpose. Instead of fearing theft, give your ideas away. This is another of the methods I use to bring ideas out of storage and into the world. I have, for example, sent an idea for a TV show to National Geographic, interface solutions to Amazon Kindle, and a special design for a baby crib to a local manufacturer. I don’t expect much to result from this, but I at least gain the satisfaction of completing small projects and clearing my mind for new ideas.

So, what is the smallest version of your idea that you can easily make with the skills and resources that you have available?

Now go and make it!

This piece is adapted from one of the essays in my book The shortest book on creativity I could write. Get your hands on the book from the author himself – that's me. Or, you can order it from Amazon.