I love watching competent speakers talk enthusiastically about the things that engage them. But when I give my own talks I sometimes find it hard to find that enthusiasm, especially if it’s a talk I have to give repeatedly. Do you have a similar problem? Then you are going to like an old acting technique that I am about to teach you, something that solved this problem for me. 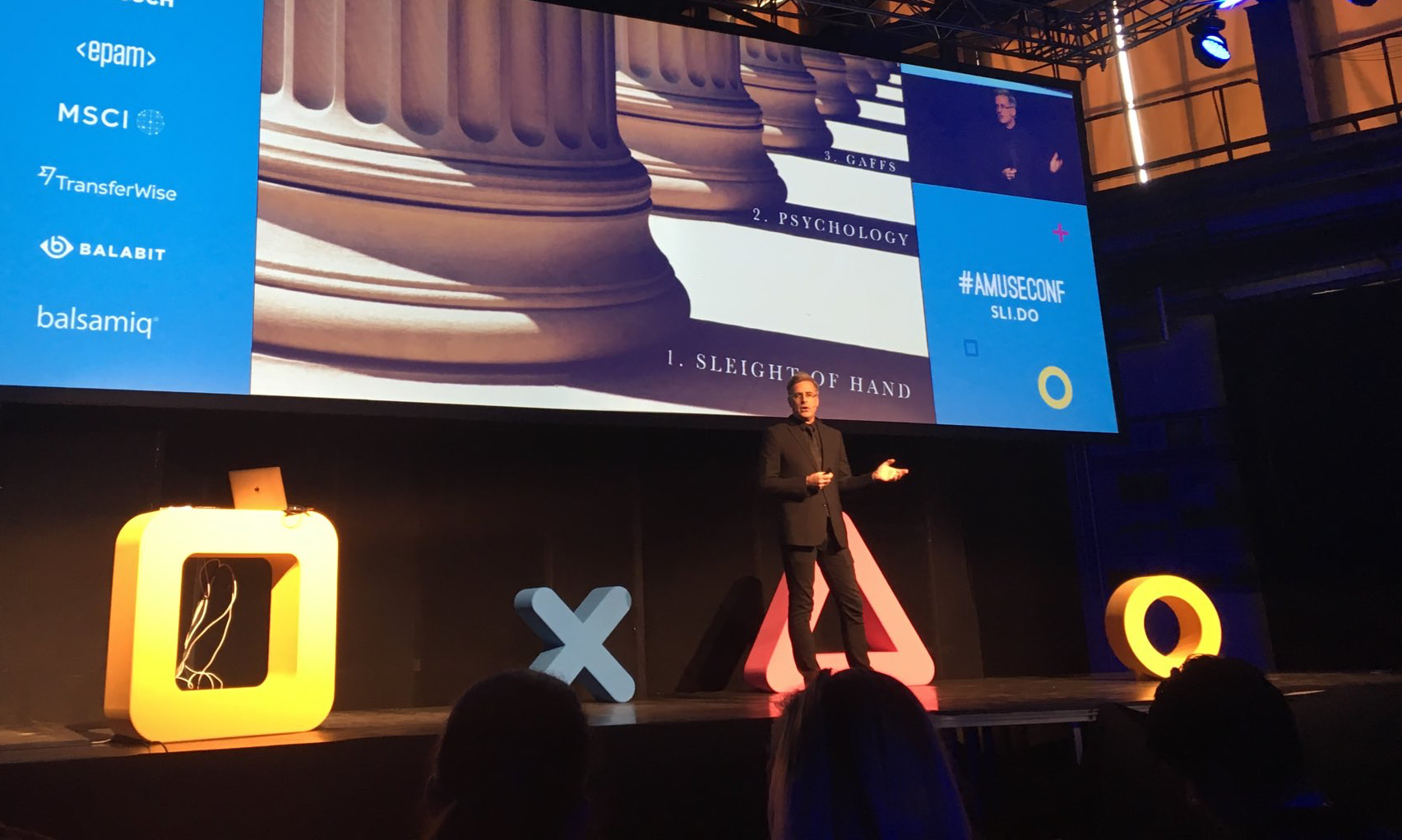 I have a talk about applying the principles of stage magic to user experience design. The talk is a labour of love and combines two of my great passions. But, the last time that I was scheduled to give it, my heart wasn’t quite in it. I had given it a dozen times already and as I was looking over my slides and speaker notes everything felt old and worn. My examples seemed dull and my points obvious and trivial. I recalled how enthusiastic I had been when previously giving the talk. What was different now?

The first few times that I gave the talk everything was new to me. After repeated performances it had become overly familiar. Clearly, that is not the case for my audience. They are always hearing the talk for the first time. For them, it is always new. I had also forgotten my initial intentions behind the structure of the talk, my choice of examples, and the points that I was making.

What if I could somehow rekindle the intentions and emotions that I had initially when giving the talk? What if I could talk and act with the same energy and enthusiasm as I did those first few times? I decided to try and reconstruct my initial thoughts and feelings. I started at the beginning. What did I use to think and feel right before I said my opening lines? I came up with the following:

You are all about to see some beautiful and wonderful things, learn some secrets, and look at your own area of UX in unexpected ways.

I wrote this down. Reading it back I could feel some of my original enthusiasm returning. 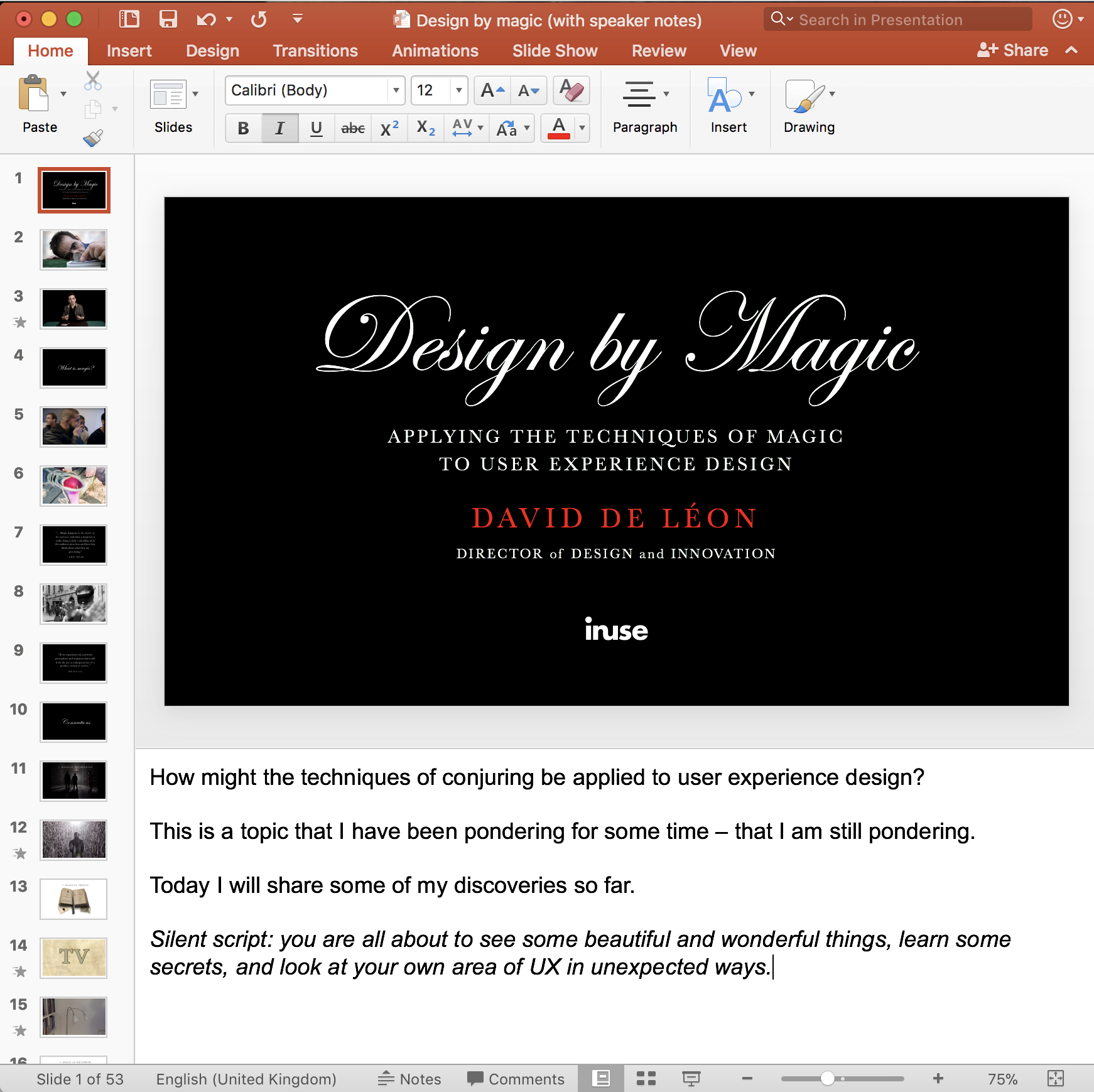 My powerpoint slide with speaker notes. Note the silent script at the bottom of the picture.

I realised that this was really an old acting technique that I had read about in a magic book on showmanship. The technique is referred to as a ”silent script” (I’ve since also seen it called an “inner script” and “internal monologue”). The basic idea is that an actor uses a script not only for their spoken lines, but also for their thoughts. Silently reciting the inner script helps an actor create convincing observable behaviour; it helps the actor be the character that they are portraying.

I continued to work through the rest of presentation, slide by slide, reconstructing my original intentions and feelings and writing them down.

Here are a couple more examples: 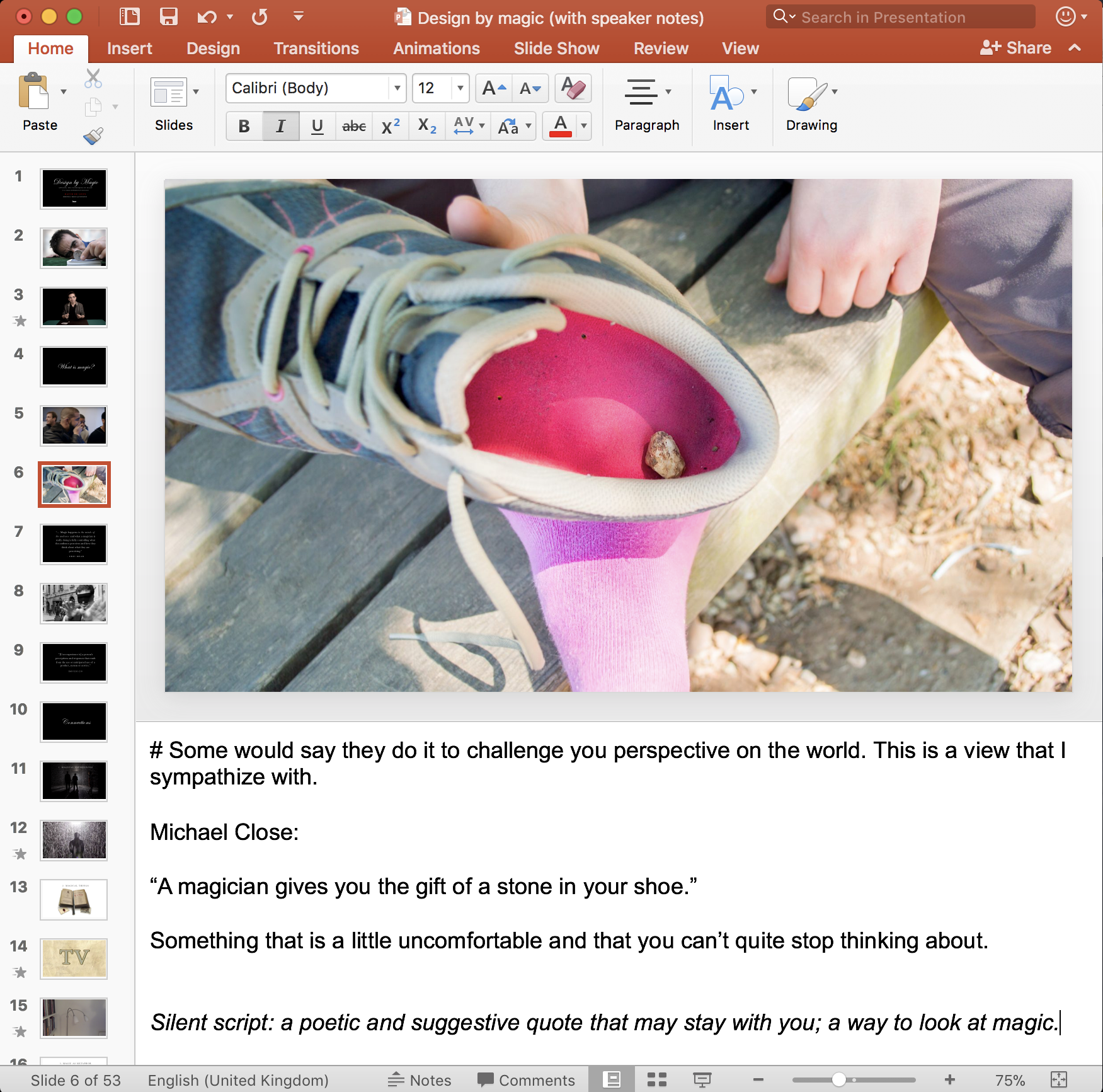 A slide in which I share a profound quote. 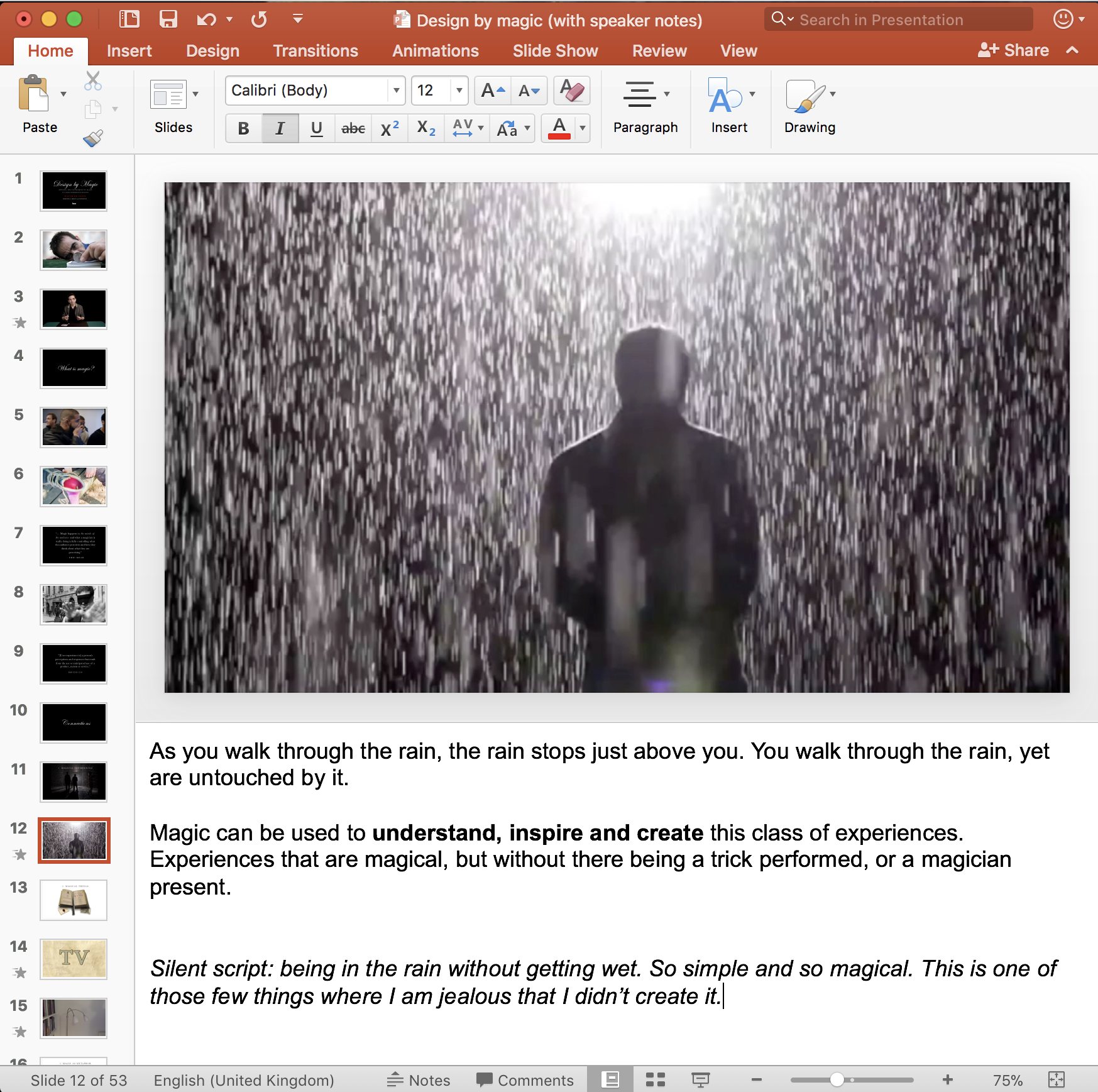 An stunning example of a magical experience without a magician present.

Going through my presentation like this, rekindled my enthusiasm and eagerness to give the talk the following day. I was now revved up and ready to go!

If you decide to try this technique you could stop at this stage. I guarantee that you will present with renewed vigour. Or, you could go further and actually perform the silent script during your presentation. Silently, of course. When I gave my talk the following day at the Amuse conference I did a mix of the two. I was still energised from having worked through my deck and notes the night before, and during the talk itself I remembered much of my silent script. I didn’t recall everything, but I didn’t have to: as soon as I had regained my enthusiasm I was on a roll.

If this was a film you would now see me give the talk. You would see the audience cheer and rise to give me a standing ovation. That didn’t quite happen. But I did give my best performance of this talk to date. I had a fantastic and enjoyable time doing so, and lots of people came up to me for the rest of the conference eager to talk about design and magic.

I know that the next time that I need to summon my energy and enthusiasm I have a means of doing so. And now, so do you. 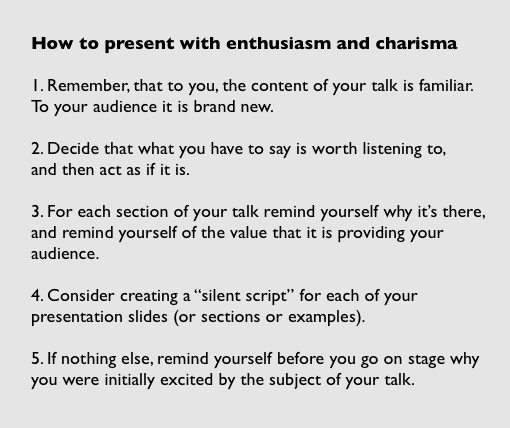