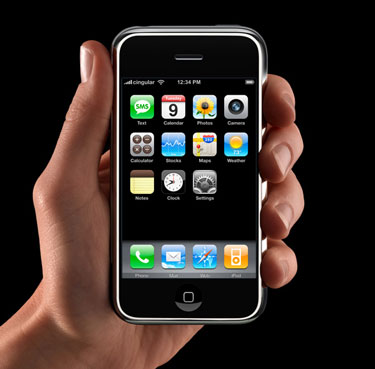 When comparing the iPhone to other mobile phones, here is what strikes me; it is an entertainment device, which happens to make phone calls too! Yes its great with the touchsreen-interaction, and nicely animated features, and cool apps which allow the iPhone to be more of a playtool or a toy than really useful. I do appreciate the apps and looking forward to using these more frequently (besides that Apple home page recommends Apps which the iPhone does not find).
What I am missing is:

1. Maps - saving functionality, how come I cannot bookmark, save locations, maps, directions and access it at a later point. For example, I type in own address and want to use it to calculate distances to other location (via car, bicyle, walking, public transportation, etc)?

2. Calender - why doesn't the calendar synchronise with other calender which I use, for example Google calender or Yahoo calender? If that is possible, how can users find this functionality on the Calender?

3. Address book - synchronisation issue, and import/export how can I use other address books, for example from other applications or online to track and keep my contacts uptodate?

Overall my impression is that iPhone has changed the physical way we communicate with each other as well; since instead of putting the phone to the ear, due to its size (too big, heavy and uncomfortable to hold in a small hand), I am making the bold assumption NOW that more people will be using the phone looking at it, talking with a headset, and interacting with it via the screen due to the touchpad and touchscreen interaction rather that using it as a standard mobile phone (where most users still put it to their ears, head. An exception being Blackberry or business users who already are accustomed to headsets). Culturally speaking, some mobile phone users prefer neat and slim phones - instead you have a clunky square to carry around in your pockets. However I do understand the dilemma as well, for surfing, emailing, online activities and screen-interaction users will require a bigger screen, in order to see and read adequately - yet in the perspective of phoning, and communicating users really just want a dial pad, addressbook, and the average phone functionality, such as SMS (txt), camera phone, bluetooth/infrared etc (although  phone feature usag/popularity really depends on country, user segments and age).

As a paradigm shift, iPhone is great for challenging and pushing other mobile phone manufacturers and operators to think differently but as a tool for communication I am not so convinced about its usefulness.