Beautiful design is often experienced as more useful, so are we slaves under our senses? And what does that mean to our design? See Iran Narges talk at From Business to Buttons.

At the inUse conference From Business to Buttons, Iran Narges, Lead Designer at Adaptive Path, presented The Case for Beauty. With a background as graphical designer and AD, she defines Beauty as Sensory pleasure + Mening and Design as Beauty + Usefulness.

She referred to Frank Lloyd Wright’s adage “Form and function should be one, joined in a spiritual union”. A user experience is to a high degree influenced by our perception of the user interface, and personal, subjective and sensory. Designing for people therefore entails designing for our senses.

On a visceral level, we evaluate beauty in 50 milliseconds. Even if we may separate function and form on a conscious level, we are still affected by the sensory experience. So, designing user experiences entails designing for the senses.

In a study described in Don Norman’s book Emotional Design (2004), two ATM user interfaces with identical functionality were compared. The version which was perceived as being more beautiful was also rated as being more usable.

The Design (or “D”) Index, is an imaginary stock index developed by the Design Management Institute in the US. It shows that over the last ten years design-led companies, such as Apple, Coca Cola, Ford and Nike, have maintained a significant stock market advantage, outperforming the S&P by an extraordinary 228%. 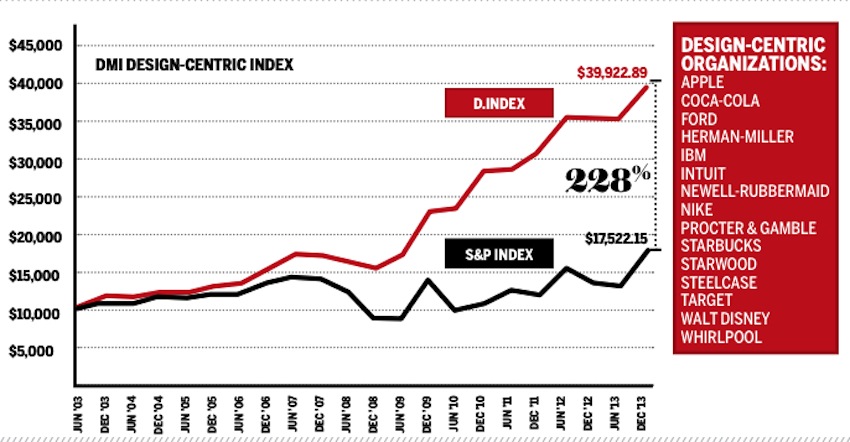 At Adaptive Path, Iran works in small, cross-functional teams, which she finds the most efficient. She also feels that visual designers should design “the whole cup, not just the glaze”.