When government has become almost synonymous with IT catastrophes – how can you change that? Leisa Reichelt can give some really useful advice. Valid not only for government, but for any IT project.

The British Government Digital Service - where Leisa Reichelt is ”Head of User Research” – has actually come quite a long way. (Think of it, just to have that title in government is quite amazing!)

– We’re starting to be able to consistently design digital services that are no longer awful, Leisa told the audience at the From Business to Buttons in Stockholm in April 2015.

It could be argued that the British government holds the unofficial world record in creating poor IT systems. Their project to digitize the entire public British health care system was the world's largest civilian IT project. 2011, after nine years, the entire project was basically scrapped, for a cost of 11 billion pounds (roughly, 150 billion SEK or 15 billion euro).

And that was just one in a series of spectacular failures. It's been estimated that the British taxpayers during the first decade of the new millennium had to pay the almost unimaginable sum of 26 billion pounds, or around 360 billion SEK (37 billion euro) – for IT systems that never came to deliver what is promised.

It's kind of hard to understand how much money that is. It is perhaps easier to grasp it if we break it down: it’s a breathtaking 100 million SEK (10 million euro) every day for ten years - weekdays and weekends, week in and week out. The good news, then, is that something was actually learned from this.

A more agile approach to IT development has been adopted in the UK, estimated to have saved taxpayers half a billion pounds, or 6 billion SEK (+615 million euro) in 2013.

But of course, it’s not just about the money: it’s really about whether the services actually are used, and their impact. Do they deliver something of value to the citizens? Do they match their actual needs?

That’s we’re the Government Digital Service has made a huge impact, with a string of well though-out services all through government, with www.gov.uk as the central point. They’ve also set a standard for digital design, with their much-admired Government Digital Service Design Principles - which, by the way, are almost totally applicable in any project, not only government projects. (A Swedish version has been adopted by the Swedish Government's Användningsforum.)

In her talk at From Business to Buttons, Leisa Reichelt pointed to five success factors that brought the Digital Services to where they are. Two that might be hard to reach, but three that you can definitely change, in any organization.

The first is getting support from ”big cheese” – in this case, the minister himself (video); that’s been crucial for Government Digital Service. But we all know it’s often hard to get. The second is having a ”big stick”. For the Government Digital Service, that’s for example the Digital by Default Service Standard, a set of criteria for digital teams building government services. If the services do not pass all the criteria, it won't appear on GOV.UK.  (You have to love the final criteria: Before going live you have to test the service from beginning to end with the minister responsible for it!)

But if these things can be hard to achieve, what can we do? Leisa Reichelt pointed to three things (video: @5:20) we all can start doing in our projects and organizations tomorrow, that will have a great impact on what's being accomplished.

The first is ”show, don’t tell”: stop talking about what you’re going to do and just do it.

(You could see half the audience nodding to this.)

– Instead, we got a small group of people into a small almost forgotten government office, and made a prototype. It wasn’t the complete thing, but they could actually show people who don’t really understand this internet thing – they’re called ”ministers” – and they could be excited about this. It was so much more effective than a proposal could have been.

– Prototyping gets rid of pointless meetings, Leisa said, and quoted Lanyrd co-founder Simon Willison (blog | Wikipedia | twitter | GitHub): You can now build software in less time than it takes to have the meeting that describes it.

– So don't ask for permission. Come to the meeting with a prototype and som test results!

The second point Leisa stressed as within reach for everyone, was ”Ask for actions and be very specific”. Get the project to do a few things that are hard to say No to. And quantify those actions with a number!

The three things Government Digital Service asks a project or business to commit to are:

This actually lead to seeing this sign posted on the wall of a project’s room: 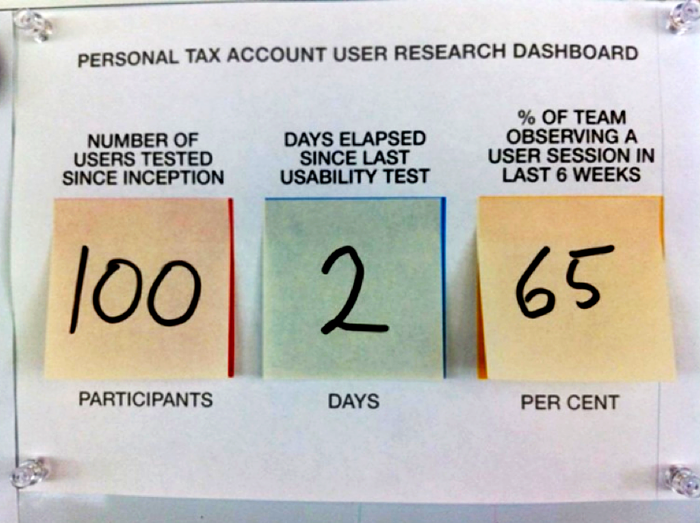 With simple steps like this, you can make UX the responsibility for the whole team – not for some strange people in a corner that call themselves UX's.

Leisa Reichelt had a hard job, following Mike Monteiro's rousing motivational speech. But to me, personally, Leisa's advice was even more practical than Mike's.

Leisa Reichelt – Good design where you least expect it (From Business to Buttons 2015) from inUse.

All talks at FBTB15

Consider a career in Sweden.