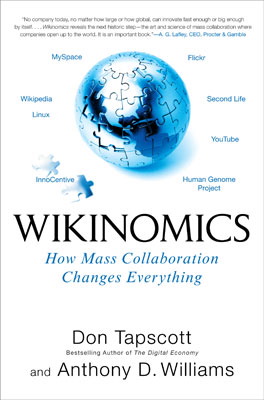 During the summer, I read the book “Wikinomics” by Don Tapscott and Anthony Williams. The book is perfect reading for anyone who's working with interactive media and services, or if you're just interested in how social networking and “the cloud” changes our society and how we make business.

If you have time to read only one book for the remainder of this year, read this one!

In short, the book describes new means for making business and challenges "the old way". The principles of wikinomics are:

The book describes new ways of making business, and a new type of enterprise, “Enterprise 2.0”, is described. Some highlights:

The book is full of interesting examples of movements towards wikinomics. Some of those that were new to me are:

Some figures and thoughts that I found interesting:

For those who like to listen instead of reading I recommend an interview on YouTube. The wikinomics blog is also o good place to find information.